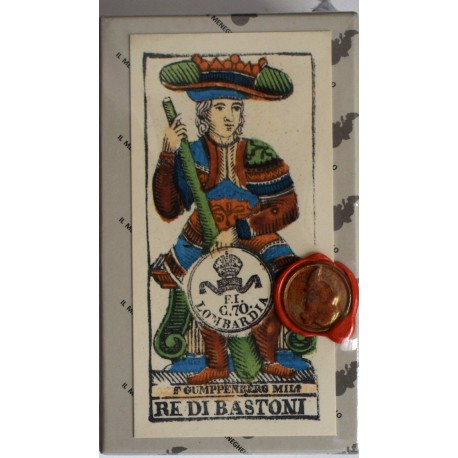 Tarocco Gumppenberg is a lovely 78 card color Tarot deck that was originally published by master printer Ferdinando Gumppenberg in 1840. It was reprinted with great care by Il Meneghello in this limited, numbered edition in 1995. The cards of this reproduction have a thick laminated finish and are printed on sturdy card stock.

According to the publisher Osvaldo Menegazzi: Ferdinando Gumppenberg is one of the greatest innovators and inventors; ingenious in the field of playing card production during the 19th century. When he arrived in Milan in 1809 from Munich, he brought German technology along with a trunk full of experience to share with Italy. He had studied with J. Fetscher and also brought with him the news, taste, fashion and trends that were of contemporary Germany and Austria during the 2nd half of the 1700's.