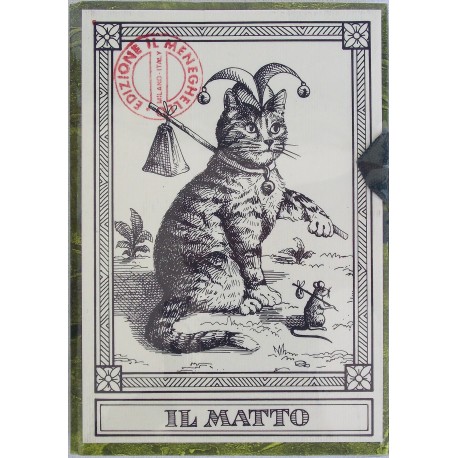 22 Arcani "I Gatti" (the cats) is one of the two cat themed trump-only decks that were published by Menegazzi Osvaldo of Il Meneghello. This is the smaller sized set. Both are B&W, 22 Major Arcana decks (the smaller set is more cream colored), both on high quality, textured card stock. Both limited, numbered editions of 2000 that came out during 1990. This smaller size deck is around 2 x 3 inches. Box style: sturdy slipcovers with ribbons. While these decks are both charming they are distinctively different. The larger version (I Gatti Buffi or Funny Cats) has the same level of high quality line drawings of cats depicted in Major Arcana situations, but these kitties are more playful and mischievous, while with this smaller version deck, 22 Arcani I Gatti, the cats seem a bit more sophisticated and majestic.