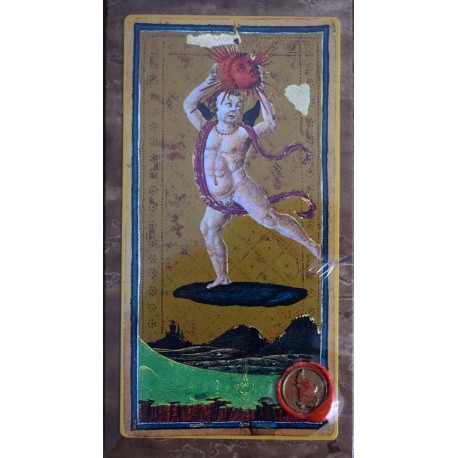 Specs: 78 card Tarot deck. A brief booklet in Italian comes enclosed.
The larger size (approximately 6 3/4'' x 3 1/2'' (17 x 9 cm.) has an antique feel and look to it and is made of sturdy card stock.
The backs are a solid color.
The Visconti Tarot is the oldest known Tarot deck, and from around 1450.
Osvaldo Menegazzi writes: The cards of Visconti Sforza were created by Bonifacio Bembo for the amusement of the duke of Milan. The emblem of the Visconti family is apparent in the cards. The technique used was tempera on paper superimposed on more than one layer. The deck that exists today is incomplete, missing four cards (The Devil, Tower, Money's Horse (The Chariot) and 3 of Spades). The original deck is currently divided into two public collections and one private. 35 cards are housed by the Academy of Carrara in Bergamo, 26 cards are kept by the Pierpoint Morgan Library in New York and 12 cards are with the Colleoni family in Bergamo.
The four missing cards have been recreated with respect to the artistic style of the original creator.