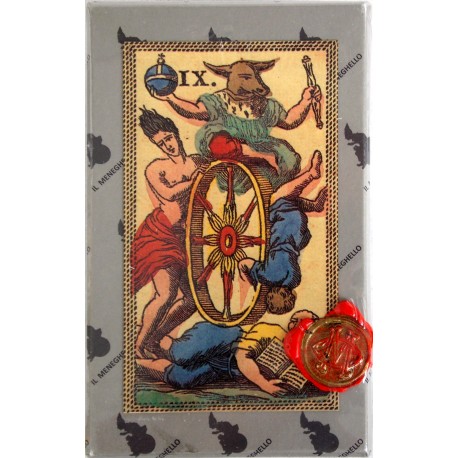 These beautiful cards have an old world look and feel to them and are made of sturdy card stock (matte). The original etchings were painted by hand. There are astrological cards along with other Tarot related archetypal images for the Majors and the Minors have symbols on the cards. No booklet was included in this set.

Minchiate is an expansion of Tarot that most likely dates back to the sixteenth century. It came into being a hundred years or so later than the origin of Tarot (which is estimated to be around 1450, in Milan). Minchiate differs from the typical Tarot deck by having 41 Major Arcana cards rather than 22. Like the Tarot, there are 56 Minor Arcana (16 Court cards, and 40 Pips) , making a total of 97 cards in the deck.

The Minchiate adds the remainder of the virtues (Prudence, Faith, Hope, and Charity), the zodiac signs, the four elements and the Grand Duke to the Major Arcana. The Emperor has been replaced by a Western Emperor and an Eastern Emperor. And the High Priestess, Empress and Pope have been replaced, or perhaps renamed.

Due to mistake in publishing ,outer foil will be opened to check content.