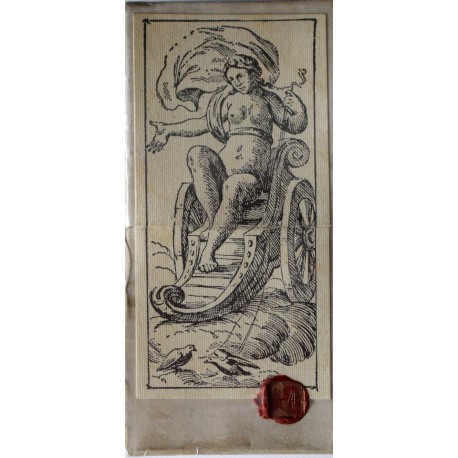 Number of cards:  62  B&W engravings on uncoated, textured cardstock
Titles on cards and booklet is on Italian.

Large sized deck of 62 cards was drawn by the brilliant artist, Giuseppe Maria Mitelli around 1660-65,

for the Bentivoglio, noble family of Bologna.

This 'tarocchino' (or 'little Tarot', since its not a full 78 card deck) is probably the earliest of its kind; a non standard tarot based on the pattern of Bologna. It is the only edition of its kind known, as other tarots made in that era were modeled on the pattern used in France and favored in the rest of Europe, known as Tarot of Marseille.

View a detailed description of this deck.      SEE New Edition