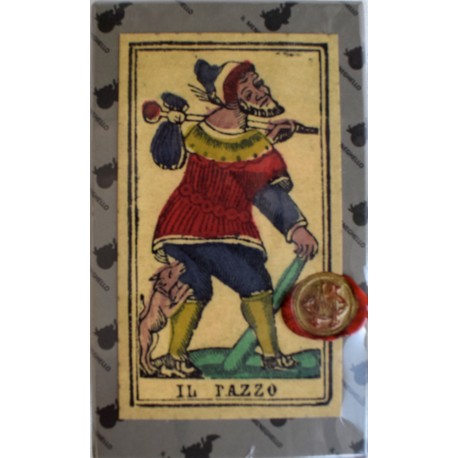 With this production, Osvaldo Menegazzi hopes to give the Tarot historian, researcher and collector an authentic experience by meticulously recreating this deck, including any markings, stains or flaws found on the original cards. According to Dr. Dorsini, this deck originally arrived to Piedmont from nearby Emila. (Piedmont is the region which borders France and Switzerland. The capital city is Turin - Torino). The oldest known document on the meaning and order of Tarot is thanks to Francesco Piscina who wrote a detailed discourse in 1565.

il Meneghello has faithfully reproduced this ancient deck from the late 1800's. Some additional notes regarding this Tarocco Piemontese XIX Sec; the Fool card is unnumbered. The Swords and Wands have Roman Numerals on the Minor Arcana Ace-10, but the Cups and Coins do not contain these additional markings. None of the four Pages have titles however; the rest of the Court Cards are titled as: Cavallo (Knights), Regina (Queen) and Re (Kings). The Four Suits are named: Bastoni (Batons/Wands), Coppe (Cups), Spade (Swords) and Denari (Coins).