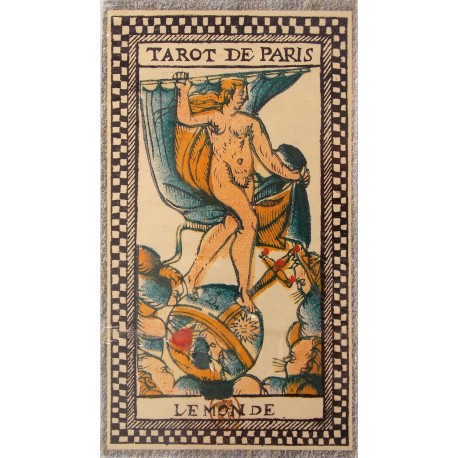 Reproduction of an ancient French tarot.

The Tarot of Paris is possibly the oldest complete 78 card tarot deck known today, kept in the Bibliotheque National de France. It is more commonly known as the anonymous tarot of Paris because the name of the master card maker does not appear on the cartouche of the Two of Denier.

This tarot can be considered atypical because it is quite different from the usual form of the tarot of Marseilles, traditionally the most well known and wide spread. Even if it does have some points in common with the tarot of Vievile, some of the arcane majors are very different.

One might assume that the interest of this tarot is limited to this point, and that it is only of interest to a restricted circle of ancient tarot cards collectors. However, an attentive examination of the arcane majors reveals a surprising complexity. For instance the arcane XVI “LAFOVLDRE” appears especially disturbing : through a magma of yellow, red, blue green and the colour of flesh, we can make out, in the little bit of white of the card, an elf .
http://editions-sivilixi.com/the-tarot-of-paris/