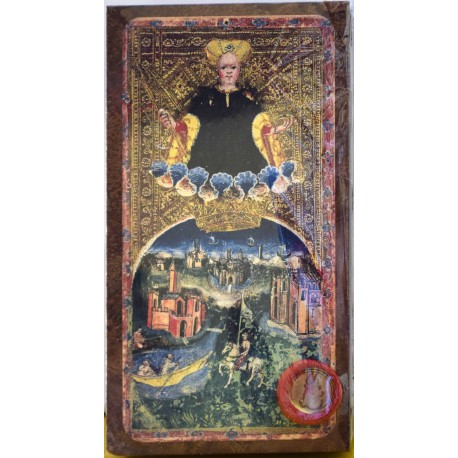 A Special Edition with free BOOK.

The Visconti di Modrone (aka Cary-Vale) has been reproduced expertly by il Meneghello. It is believed to have originally consisted of 86 cards. This offering is the incomplete set of the 67 remaining cards in existence, a handcrafted box and historical details in a booklet, (in both Italian and English), by Dr. Dorsini. No new cards were made to replace the missing ones as this is meant to be an accurate historic reproduction. The deck consists of 11 Major Arcana, 17 court cards & 39 numbered cards. A distinctive feature about Visconti di Modrone, aside from it's singular beauty, is the Court Cards. In addition to a King & Queen, each suit had both a male and female Knight, and a double set of Pages as well. Some of these cards were, sadly lost to time but the ones that survived are reproduced perfectly in this special edition.

il Meneghello has faithfully reproduced this exceptionally gorgeous deck from the 15th century for Tarot enthusiasts, historians and collectors so that we might have the powerful and exciting experience of holding this precious bit of Tarot history in our hands to enjoy and investigate further.